Skip to Part 2 if you just want a drop-in escaping function. Keep reading if you want to know why you don’t need one.

Thanks to widespread adoption of ORMs, it’s rare that I need to construct SQL queries in code. However, there’s at least a couple situations where the need still arises:

(The latter is how I came to visit the topic recently.)

The trick with constructing SQL queries is that user-input typically needs to go somewhere in the query, and that means you need to protect yourself from SQL injection. 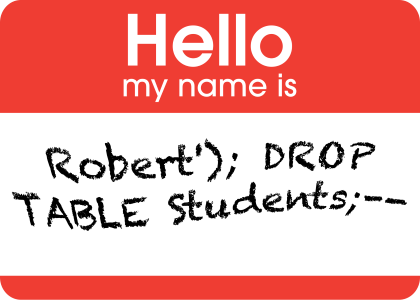 Fun Fact: SQL injection has been known a known vulnerability since the late 90s and yet it still seems to make headlines in 2015.

Example of parameterized queries with ADO.NET in C#

As long as all user input goes through a query parameter before it makes it into the SQL query, there’s no way I can introduce an injection vulnerability. And the great thing about query parameters is that they support pretty much any query you’d want to create… except when they don’t.

In programming, laziness is a virtue. Let’s say I’m creating the interface for a list of accounts. I want to let the user sort the list by account name, creation date, street address, or any other column. To support this, I could write code like:

But look at that duplication! No, a virtuous lazy programmer wants to write something like this:

Notice how we’re trying to make @sortColumn a parameter of the ORDER BY clause. Unfortunately that doesn’t work, because you can’t inject column or table names with query parameters.††

It’s not just ORDER BY clauses that have this limitation. Query parameters don’t support injecting any of following:

Let’s take another look at the user-sortable query:

How does the user select (or input) which column to sort by? Chances are it looks roughly something like this:

If that’s the case, the UI layer already has knowledge of what the valid column names are. There’s no need to escape user input in any way when it can be validated against a whitelist of all known good values.

Assuming the list of columns is defined somewhere in the code:

Then protecting the query from all forms of injection is as simple as:

This is consistent with the advice from The Unexpected SQL Injection:

The actual problem of the query is […] the fact that user-supplied input is used as a column name. Example B shows a possible solution, where only a fixed number of options are allowed. […]

Note that the same applies for other identifiers and syntactic elements that a programmer may wish to dynamically copy from the input to a query, such as table names, column aliases, ASC/DESC keywords, etc.

— Alexander Andonov (From the section, “Hi, what’s your column name?”)

A further word of warning: a query safe from injection is not necessarily safe. If accountsSortableCols from the example contained a sensitive column, such as secretAnswer, a clever attacker could deduce the value without ever needing SQL injection.

When The Right Approach Isn’t Enough

Good code architecture includes splitting separate concerns into separate layers. The code that validates if user-input represents a valid column is frequently several layers removed from the code that constructs the SQL query.

If you saw the following in a codebase, could you say there was a vulnerability?

Maybe. It depends on the context. Is userSortSelection always validated before ListAccounts is called? Then no, that code isn’t vulnerable.

The trouble with this kind of code is that even if it’s provably-secure right now, there’s no practical way to verify that it remains so. Who is going to check all the callers of ListAccounts (and their callers) for correct validation after every change is made?

† Parameterized queries even work in VB6. It’s sad that I know that for a fact.

†† Not entirely true. If you contort your query, you can specify column names indirectly