At work we’ve got a large AngularJS codebase. It’s on 1.x now. Someday we’ll either upgrade the existing code to Angular 2 or start doing everything in React. This post is not about your existing codebase. Angular 1.x will be around and supported for a long time.

However, we recently started a greenfield project. That meant choosing a tech stack. And well… choosing a frontend framework in late 2016 is interesting to say the least. Since this new project will be around for years (hopefully) we didn’t want to choose a framework that is in the later half of its lifecycle.

Make no mistake, interest in Angular 1 is on the decline—not just because Angular 2 is now officially released—but the data is clear about it as well: 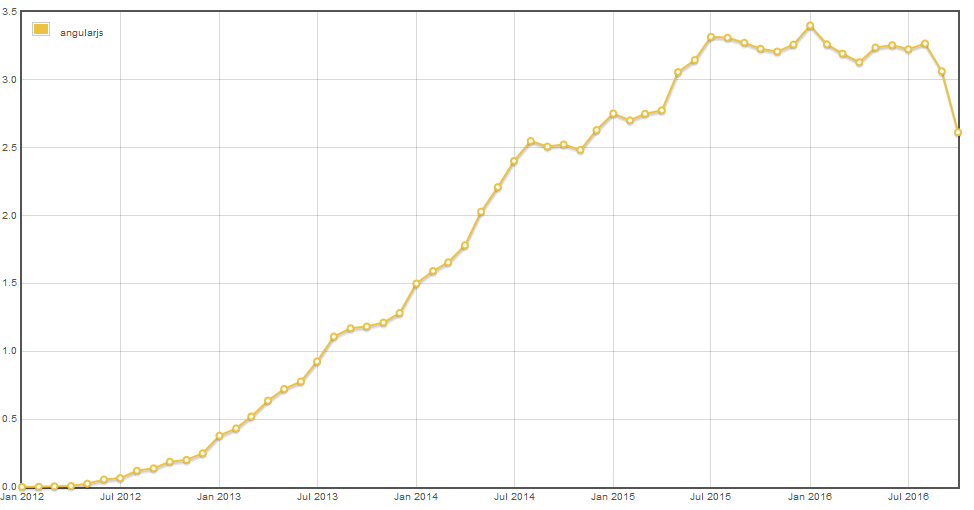 This graph plots the number of questions asked on Stack Overflow for the angularjs tag (as a percentage of all questions asked) per-month. If that’s not enough to convince you, keep reading because the rest of the data I found is consistent with this point.

When choosing a framework you need to consider first-and-foremost:

I could go into the technical merits of Angular 2 vs. React, but I’m probably among the least-qualified people to talk on the subject.

What I can talk about is adoption rates. Framework popularity may be lumped into the “everything else” category, but it’s still an important factor. It can influence:

If you search for “angular vs react” you may run across this post by Kamil Przeorski. The author has a React bias, but he posts some compelling data, including this graph of technologies listed in Hacker News job postings over time:

We can learn a few things from this data:

While Hacker News may be representative of many startups and companies at the leading edge of adoption, there is a large world of software development outside of it. I think we need to get more data.

Interest in React continues to grow, while Angular is still hugely popular but maybe not growing in popularity. Google only gives us the very broadest strokes (Angular vs React) though.

Looking at Reddit statistics, we can start to tease out interest in Angular 1 vs Angular 2 vs React by looking at the growth of the number of subscribers in the respective subreddits:

That graph is a little noisy. The trends become clearer when we look at the total number of subreddit subscribers over time:

React continues to show strong growth in interest. Interestingly, Angular 1 (/r/angularjs) interest appears to be plateauing, but when you add in Angular 2 (/r/angular2) interest, the overall trend for Angular may be increasing. It is hard to know though, since /r/angular2 growth may be driven by people still subscribed to /r/angularjs.

Everything we’ve seen so far is a decent approximation for how many people want to use Angular or React. In the modern, open-source era though, we can get more direct. How many people are actually using the framework in real world projects? While there is no survey of every real world project out there, we have two good proxies: 1) issues and pull requests submitted to the Github project, and 2) questions asked on Stack Overflow.

Sadly, I don’t know of a tool that graphs the history of issues (or PRs) opened on a Github project over time, so instead have this graph of Github stars over time: 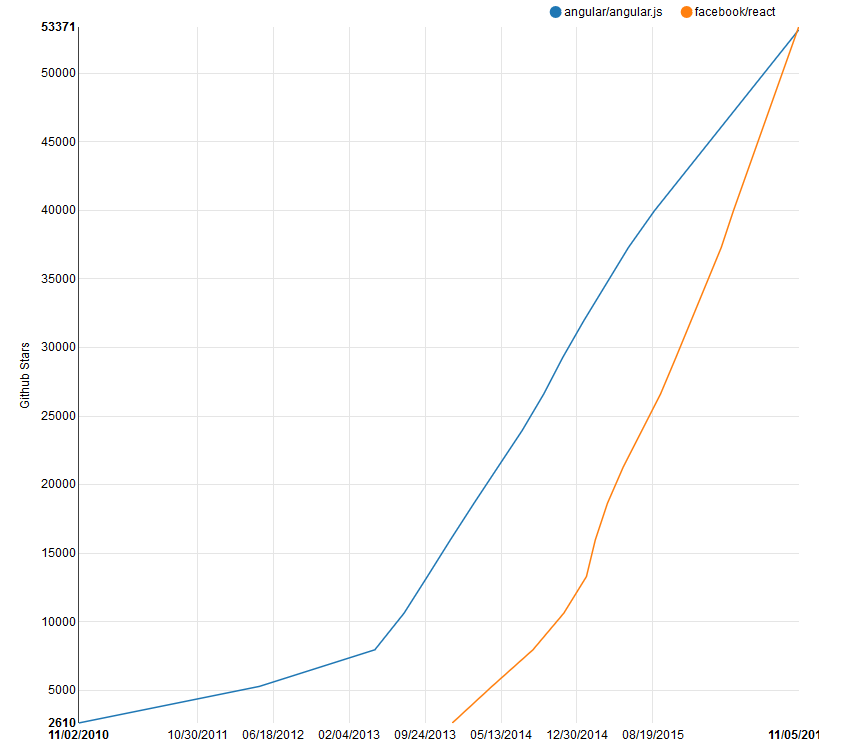 What I can reveal to you is the complete graph from the beginning, Stack Overflow questions over time for all the relevant tags: 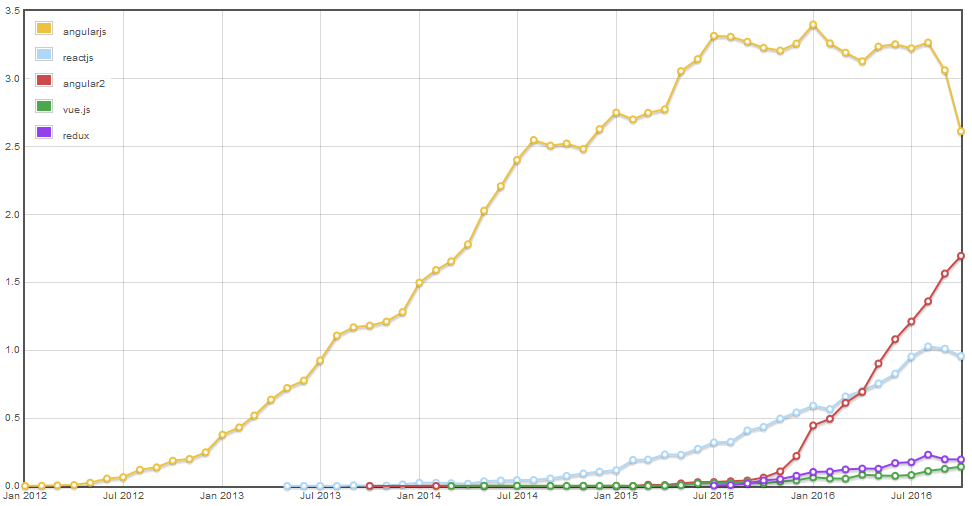 It is absolutely valid, however, to compare frameworks by looking at the growth rate of questions. Doing so we can see that React is growing well (although curiously plateauing in recent months, in contrast to all other data). But more interestingly, we can see that while Angular 1 is on the decline, adoption of Angular 2 is strong and growing.

A couple more notes on the graph:

So What Does It All Mean?

I could start by telling you what we adopted for the greenfield project at work (React), but does it really matter?

In my uninformed opinion, both Angular 2 and React are solid frameworks on their technical merits.

If you agree with my analysis of the framework adoption data, then you know that both Angular 2 and React are strong and growing (looking at Stack Overflow growth and jobs growth respectively).

My takeaway? Pick whichever framework makes sense for your project and don’t worry about it. You’re in good company whichever one you pick and don’t let anyone without data convince you otherwise.